I’ve never been one to play organized sports. When I was in the third grade, I played softball… sort of. By “played softball”, I mean I hung out in the outfield with my glove on my head and dandelions in my hands. When it was my turn to bat, I rarely actually hit the ball. In my defense, it wasn’t long after my foray into organized sports that I got my first pair of glasses. It’s hard to hit a ball – even one as large as a softball – when you can’t see it!

Because of my lack of success, I never truly considered myself athletic. I highly doubt anyone else did, either. I was gangly & awkward. I was never picked first in PE class, but I don’t think I was picked last. Maybe second to last? As a matter of fact, I know that I failed PE in high school at least once. I hated “dressing out” since there was this one girl (who shall remain nameless… for now) who always made fun of my legs. They were bony little bowed legs, and she teased me mercilessly from about the fourth grade until graduation. She made me hate PE.

Imagine my surprise when I learned that I am not necessarily athletically challenged!! I’m pretty decent in rock climbing gym & dying to transition those skills to the outdoors, improving significantly at mountain biking (not quite ready for anything too extreme but better than someone who doesn’t try), I run when I want to, and I rock at backpacking.

Somewhere around Tray Mountain, I realized that backpacking counts. It’s not a traditional sport because it’s not competing (unless you are trying to break a record or something… which I’m not). It’s really only walking, but it’s slightly more challenging when you add the altitude gains and pack weight.

I spent almost 40 years believing I was athletically challenged. At 41, I learned an important lesson. A lesson that I hope to teach to as many kids as I can. Today, I will start spreading the word: labels suck.

You know you’ve heard it – or maybe even said it, “She’s the ______ one.” We add the labels to kids. The pretty one, the smart one, the athletic one, the mature one, the funny one. Guess what? You can be ALL of them at once! You can be pretty, smart, athletic, mature, and funny. Don’t settle for less. Don’t let your kids settle for less. 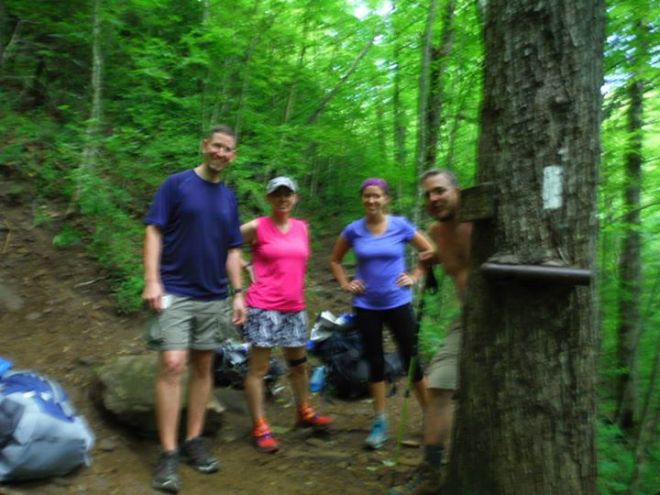 I was blessed to hike with this smart, athletic group.